Check out these links to more live recordings:​ 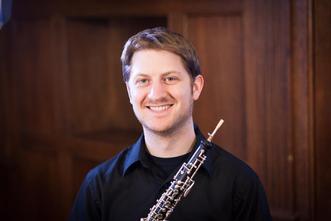 Courtesy of Headshots by Ron — oboeron.com

Tim is a frequent substitute with the Orchestra of St. Luke’s, and has also performed with the Vermont Symphony Orchestra, New World Symphony, New York Festival Orchestra, and many other large and small orchestras in the Boston, Philadelphia, and New York areas. He has been a concerto soloist with the New Haven Chamber Orchestra, Siena Session Festival Orchestra, and Philadelphia Youth Orchestra, having performed concerti by Bach, Marcello, Mozart, and Vivaldi, and was featured in Le Tombeau de Couperin with the Yale Philharmonia. His summer music festival fellowships include Norfolk Chamber Music Festival, AIMS Graz Music Festival, and Chautauqua Music Festival. He has performed under conductors such as Peter Oundjian, Giancarlo Guerrero, Hugh Wolff.

As a chamber musician, he recently performed with the New York Chamber Soloists and the Caroga Arts Ensemble on both oboe and English horn. His former woodwind quintet, the Philharmonic Five, were twice winners of the ensemble fellowship at New England Conservatory, for which they performed recitals in Jordan Hall, Boston’s Museum of Fine Arts, and were frequent performers in outreach concerts and events throughout Boston. Still with a strong internet presence, online recordings of the Philharmonic Five have been viewed over 100,000 times. Tim performed the Solo Oboe part in On Distant Shores by Aaron Jay Kernis in the New Music New Haven Concert Series and performed Andre Previn's Trio for Oboe, Bassoon, and Piano as a winner in the Oneppo Chamber Music Series Competition in 2016.  He has received chamber coachings from musicians including Ani Kavafian, David Shifrin, and Peter Frankl and musicians from the Berlin Philharmonic, the Cleveland and Philadelphia Orchestras, the Boston Symphony Orchestra, and the Orpheus Chamber Orchestra. Tim holds degrees from the Yale School of Music, New England Conservatory, and Cleveland Institute of Music.